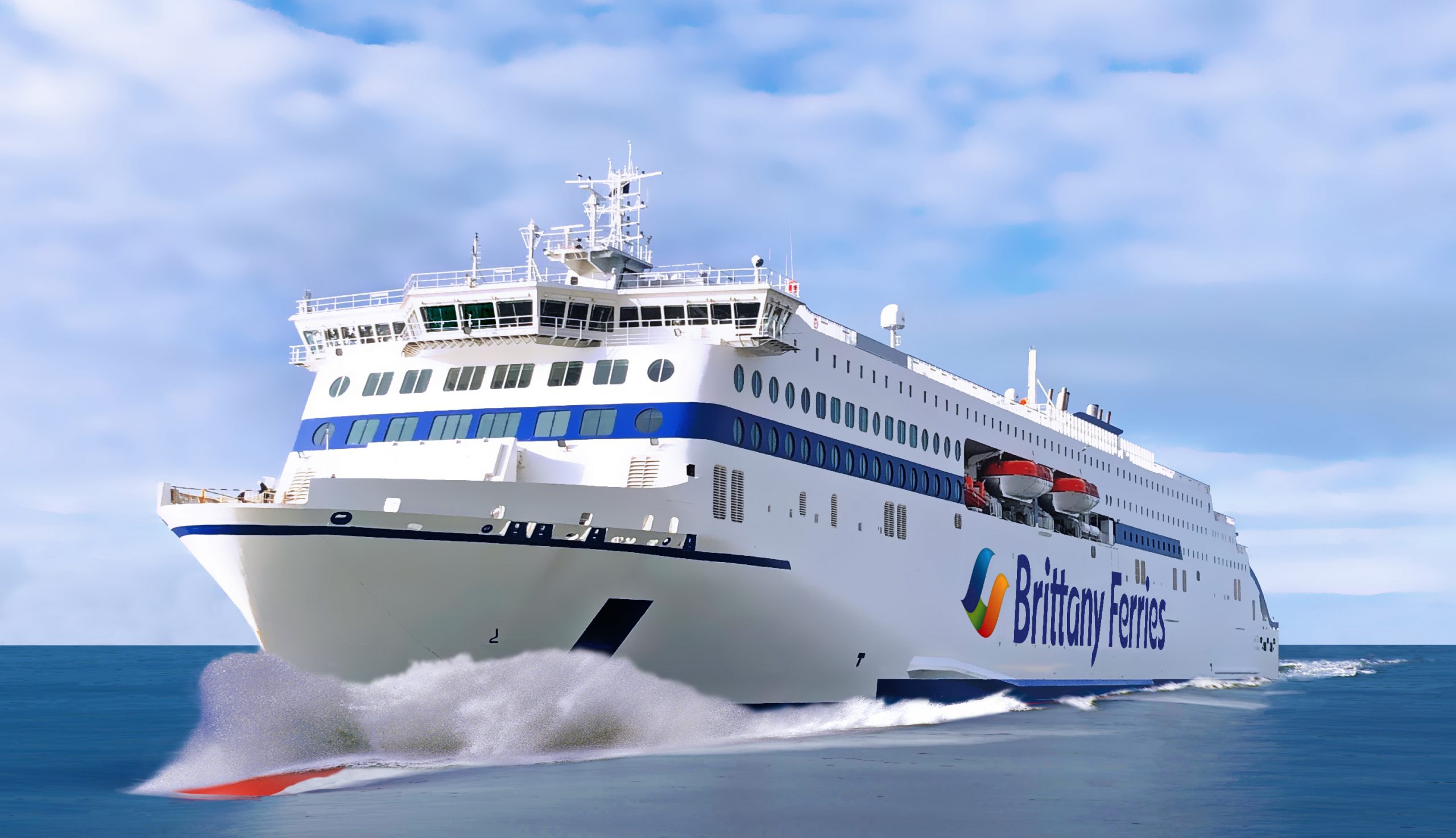 Two new hybrid LNG-electric ships are coming to the Brittany Ferries fleet. They will arrive in 2024/2025 to serve routes connecting Portsmouth with St Malo and Caen. As well as significantly cutting emissions, the hybrids will deliver less noise, less vibration for passengers and a step towards future-proofing the company.

The ships operate on the same principle as a hybrid car. At sea, they will be powered by cleaner LNG (liquefied natural gas) fuel. But in a first on the English Channel, they will also operate partially or completely on battery power– for example when arriving and departing ports.

Furthermore, they will be ready to plug in to shore-side power when this is available in ports. This will allow recharging of onboard batteries and power for systems like air conditioning, heating and lighting while at berth, cutting funnel emissions to zero.

The ships will be chartered from Stena RoRo on a ten-year agreement, with a purchase option after four. They will take the place of Normandie and Bretagne, two grandes dames of the fleet. Designed to better serve freight and passenger traffic, they promise more scope to carry tourists to Normandy and Brittany outside of peak holiday periods.

The move is all part of Brittany Ferries’ fleet renewal plan, one of the pillars of its five-year post-Covid recovery strategy. The vessels will follow the deployment of Salamanca in 2022 and Santoña in 2023, both of which will be fuelled by LNG ready to serve UK-Spain routes.

“Fleet renewal is not a choice for Brittany Ferries; it is an imperative to secure our future,” said Christophe Mathieu, CEO Brittany Ferries. “Our customers rightly demand cleaner, greener vessels and our port partners expect us to be good neighbours. Furthermore, we will certainly face tighter regulation in the years ahead. The future of our company depends upon our ability to rise to the challenge today, to prepare for tomorrow. That is why I am so proud to announce these new vessels.”

“They bring with them a host of innovations just as Bretagne and Normandie did when they were launched. Both vessels have served us well and we are grateful for the support of the regions that bear their name. They are much loved by customers and crew, but now is the time for us to look to the future and to plan for a brighter future, even as we battle the crisis we face today.”

For passengers and for freight:

Each ship has been carefully designed to suit the route on which it will operate, taking account of future trends in both passenger and freight traffic. To begin with, the garage will be longer and higher which means greater freight capacity. However, they will also be better adapted to new types of passenger vehicle.

This includes the trend towards bigger cars. Today’s Mini for example is 25% longer and wider now than the version on sale when Bretagne was launched. Additional lane space will allow easier access upon boarding and disembarkation, particularly for passengers with mobility problems. The physical size of the garage means they will also be better suited for motorhomes.  Meanwhile in-voyage charging will be available for electric car drivers, allowing them to fuel-up en route, ready for their arrival in France.

There will be more cabins too. While Bretagne and Normandie have high (potential) passenger capacities, the reality is that night-time crossings can be limited by cabin availability. Both new ships will therefore come with more cabins, as well as an improved mix of cabin types.

Both ships will host an increase in pet-friendly cabins, ensuring four-legged travellers are well accommodated too. More details about services on board will be released in the months and years ahead.

how the hybrid system works:

The hybrid ships have two propellors. Each propeller is connected via a prop shaft to a separate gearbox. The gearbox manages power supplied from one LNG engine and to one reversible electric motor. The electric motor is used to either:

When driving a propellor, the electric motor is fed by batteries. But it can also be boosted by power from the second LNG engine, configured via the gearbox for the second propellor.

When operating in reverse, the electric motor charges batteries. Depending on charge, the batteries can also be used to power systems on board such as air conditioning, heating and lighting, for example when in ports.

Today, Brittany Ferries has established itself as the national leader in French maritime transport: an atypical leader, under private ownership, still owned by a Breton agricultural cooperative. Eighty five percent of the company’s passengers are British.