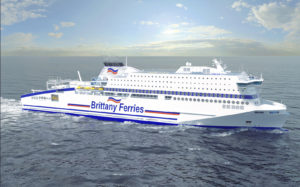 Brittany Ferries is delighted to confirm the construction of a new cruise ferry to join its 10-ship fleet. The new craft will be named Honfleur, following a long tradition naming ships after beautiful destinations served by the company.

Honfleur promises to be the most environmentally friendly ship regularly operating in UK waters when she takes to the seas in June 2019. But she will also be a ship that presents a canvas of modernity, comfort and relaxation for passengers on the company’s busiest route, operating from Portsmouth to Caen.

Honfleur will be built at the Flensburger Schiffbau shipyard in Germany over the next two years and will be powered by LNG (liquefied natural gas). Compared with diesel fuel, LNG emits less carbon dioxide during combustion and burns with no smoke. It is entirely free of sulphur and produces very low emissions of nitrogen oxide and particulate matter.

She will carry up to 1,680 passengers and will come with 261 cabins, two cinemas, restaurants, boutique shopping and expansive passenger lounges. Honfleur will operate alongside Brittany Ferries’ Mont St Michel on three daily return sailings. Normandie, the cruise-ferry she replaces, will move east to serve the Portsmouth to Le Havre route.

Jean-Marc Roué, Brittany Ferries president said: “The significant investment we are making reflects our on-going commitment to developing the regions in which we operate, to linking people and to reducing the environmental impact of our ships. Despite the challenges of Brexit we remain confident in the future and our first new ship since the delivery of Armorique in 2009, with a budget of around £175m, underlines this resolve.”

Honfleur represents the next step in Brittany Ferries’ drive towards the future of sustainable transport. The move to LNG follows a €90 million investment in sulphur and particulate-reducing ‘scrubber’ technology. These exhaust emission systems have been retrospectively fitted to six Brittany Ferries ships over the last 18 months, in a project supported by around £5m in joint funding from the EU and its executive agency INEA – and the ADEME in France.

More than four in five people travelling on Brittany Ferries’ ships are British and up to 2.7 million passengers are carried each year, across routes covering southern UK, western France, Spain and Ireland. Portsmouth-Caen is the most popular crossing carrying around 1 million passengers, 300,000 cars and 100,000 freight units on the western channel annually.

All power to Honfleur

Liquefied natural gas (LNG) is a cleaner burning fuel than diesel (see below for more on the benefits of LNG). But ships that feature LNG-electric propulsion systems are also quieter, more efficient and are less prone to vibration. This means a smoother, more comfortable ride for passengers.

To address the issues of LNG infrastructure, specifically the lack of storage facilities in ports served by ships, Brittany Ferries has partnered with Total for an innovative delivery solution in France.

Honfleur will be the first passenger ship in the world to be equipped with on board cranes that allow 40 feet (ISO standard) LNG containers to be lifted into a fixed position.

The containers will be transported by truck from an LNG terminal to Ouistreham and then driven on board. They will then be hoisted into position alongside a fixed LNG storage tank located at the rear of the superstructure. Upon the next call at port, empty containers will be removed and replenished with full units.

Power delivery will also be very different to other ferries in the fleet. Powered by LNG, Honfleur’s four main engines will feed electric generators and two electric shaft propulsion motors with two fixed pitch efficient propellers. This is a standard known by the collective name diesel-electric-propulsion  – a configuration applied extensively on large cruise vessels for enhanced passenger comfort and optimised fuel consumption at reduced speeds.

Christophe Mathieu CEO of Brittany Ferries said: “It is important that we invest in new technologies and new vessels that respect the environment in which we operate. Equally, we must not forget that our customers expect Brittany Ferries ships to be comfortable, relaxing and adapted to the digital age. These objectives are compatible and I believe Honfleur will set a new standard for ferries operating on the Channel.”

Passenger spaces will come with a range of digital innovations, but Honfleur’s design will embrace principles that define every Brittany Ferries ship: wellness, culture and relaxation.

1,000 original works of art are hosted on ships in the fleet and Honfleur will continue to this tradition, exhibiting works by regional artists.

Two dining options will be on the menu: a full-service à la carte restaurant and self-service facility. Ingredients will be sourced locally and dishes prepared on board will be of the highest quality. There will also be a cafe and of course a bar.

A brace of cinemas will screen the latest films and fashion and technology will be sold in boutiques on board. Children will be well served too: Honfleur promises play areas and digital spaces and even the opportunity to be captain of the ship, driving Honfleur on a big screen.

WiFi has been confirmed in all public spaces, cabins, exterior decks and car decks, a first for Brittany Ferries. Every cabin will also come with a TV. Front and rear cameras will allow passengers to follow the progress of the ship on screen.

Her information desk will be fully adapted to the digital age. Designed to simplify communication, it will provide passengers with information about their destination and the vessel, as well as allowing them to book future crossings. Large screens will present, for example, services available on board, places to visit on arrival at a destination and connection times.

There will also be the opportunity to browse recommendations left by the other passengers.

Honfleur in Normandy is a charming seaside town on the Seine estuary, famed for its tall, narrow buildings. Surrounded by lush greenery and framed by hills, it has long been the inspiration for artists, writers and musicians. Brittany Ferries is proud that its new ship will bear the name of this popular and beautiful town.

The école du Honfleur (the Honfleur School), an artistic movement involving Monet and Eugene Boudin (who was born in the town), had a big influence on the Impressionist Movement. Some of their paintings of the town can be seen in the Eugene Boudin Museum.

Honfleur is home to many museums including a maritime museum, a museum of culture and folk art and a town museum that all illustrate the area’s rich past. The Eglise St Catherine is the largest wooden church in France.

On 6 June 1986 Brittany Ferries began services to Caen, a route that now accounts for 38% of up to 2.7 million passengers the company carries annually on all services operating between the UK, France, Spain and Ireland.

First ashore in 1986 was one Bill Millin, playing his bagpipes. Piper Bill, as he was known, was the man who famously walked the beaches of Normandy 42-years earlier playing while the invasion battle raged around him.

Portsmouth and Caen are now officially twinned, a sign of the strong links that have developed between the two cities since the ferry route opened thirty years ago – and something that will remain long after Brexit negotiations have concluded. More than a million passengers are carried every year, with a crossing time of around six and a half hours.

“In the last 40 years Portsmouth has become Brittany Ferries’ hub, serving four destinations in Normandy and Brittany, as well as two in northern Spain,” said Mike Bevens, commercial director. “But our Caen route holds a special place for staff and passengers. It’s our most popular service, carrying by far the most traffic and is gateway to beautiful French tourist destinations including Honfleur itself.”

Brittany Ferries is delighted to have signed the contract for construction of Honfleur with the Flensburger Schiffbau-Gesellshaft shipyard in Germany.  For the next two years, we anticipate the following milestones:

The benefits of LNG

Although Honfleur is not the first ship to be powered by LNG, she will be the first regularly operating on the Channel. Ferry services powered by LNG already operate in the Baltic Sea and the technology is tried, tested and safe.

As the name implies Liquefied Natural Gas, is a process by which a liquid is created from a naturally occurring gas. This is cooled to temperatures of -162 degrees Celsius, which shrinks it by a factor of 600 in volume, creating a liquid.

This is colourless and odourless, and many thousands of cars and commercial vehicles are currently fuelled by LNG. It’s a more efficient combustion process than burning traditional fossil fuels, with around 25% fewer carbon dioxide emissions. More significant benefits come from the fact that emissions are sulphur-free and there is a significant reduction in nitrogen dioxide and PM (particulate matter).

LNG is now becoming increasingly common as a fuel for passenger ships. Ferry lines such as Viking Line and Tallink, as well as cruise lines like Carnival, Aida and MSC, have turned to LNG.

Ships operating on LNG have an excellent safety record and are required to comply with a new set of regulations known as the IGF code. This has been specifically developed for the use of gas as a propellant, with safety elements drawn directly taken from ocean-going LNG carriers. This sector has operated without major incident for the last forty years, with many LNG carriers able to handle up to 120 000 m3 of LNG. Honfleur, by comparision, will carry up to a maximum of approximately 350 m3.

LNG is clearly a fuel for the future. It is favoured by regulators and everyone who is concerned about protecting our planet. The European Commission’s Energy Roadmap 2050 for example, points to natural gas as key to aspirations for clean energy targets in 2050.